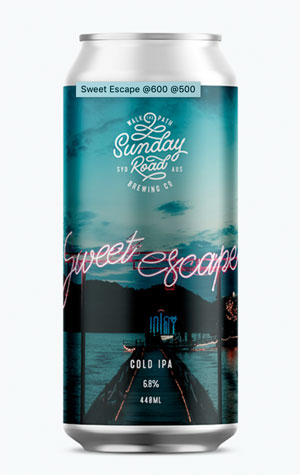 Between big West Coast vibes and the can design showing a jetty stretching into the water at the blue hour†, this cold IPA really is a sweet escape from anything bland in your life.

While Sweet Escape shares two of the three headlining hops of Sunday Road’s previous cold IPA – Ekuanot and Amarillo have stayed, and Idaho 7 has replaced Sabro – the drinking experience is totally different. Rather than a focus on zingy fruit and florals, Sweet Escape is a fresh pine bomb with an earthy fuse. It’s clean and bright with a dry bitterness that’s there from beginning to end; there’s none of that "hint of bitterness in the back" business going on here.

Despite its use of Cryo hops and a new style, this beer captures so much of a West Coast IPA from 2016. The main difference between this West Coast and a more traditional one is the restrained malt body – the big distinction of the cold IPA style – that makes this beer ridiculously drinkable for a 6.8 percent ABV WCIPA. I won't lie – it's really working for me.

†If you’ve never heard of the blue hour before, don’t worry - neither had I. My photographer friend told me about it when he saw this beer. The blue hour is a period at twilight when the sun is below the horizon, making the sky a deep blue and covering the whole landscape with bluish light. Despite the name, it only lasts for about 20 minutes… which is probably longer than this beer will last you.