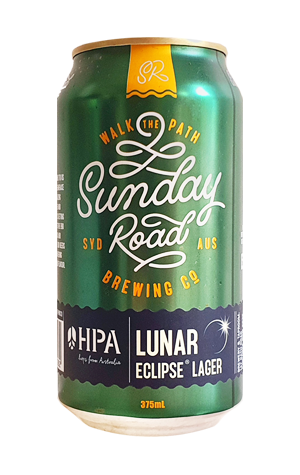 This is a beer that surprised all kinds of people.

It was released as part of the Eclipse Mixed Pack that HPA used to launch their newly-named Eclipse hop variety. But, while a number of the breweries made a mandarin juice bomb IPA to hold the hops up as the main star, Sunday Road decided to brew something a little different: a dark lager featuring Eclipse hops as an edgy side character.

If all you'd known of lagers up to this point was light gold and low flavour, you’re in for a shock. In lower light, Lunar Eclipse looks to be an opaque black, but hold it up to the light and you’ll get a glimpse of Sunday Road's reddest beer to date, glinting like cola.

The aroma is dark chocolate and bitter coffee with citrus sneaking in around the sides, and almost a touch of smokiness from the roasted malts. But as you start drinking, the hops reveal themselves more – think dark chocolate orange, or that delightful Italian way of drinking espresso with lemon peel.

And yet, for all this smooth roast and zingy twist, this single hop dark lager still somehow manages to finish clean, bringing its final surprise: this is a dark beer that goes down well on a hot day.