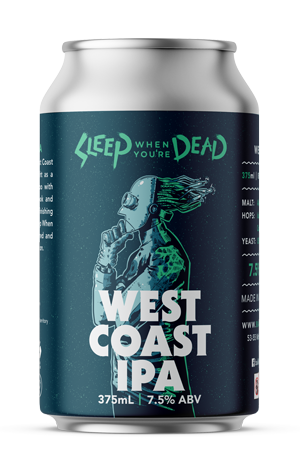 Before the haze craze began, IPAs were supposed to be bitter. But there was still always the question of balance: what’s a good balance between bitterness and other flavours?

An experienced brewer once told me his rule of thumb for balance was 10 bitterness units (IBUs) for each percent of ABV, so the malt body and sweetness and alcohol heft was always sufficient to keep the bitterness in check. While that's just one brewer’s opinion, and taste is subjective and all that jazz, I'd say this beer proves the theory.

Ballistic’s West Coast IPA, the latest entry in their Sleep When You’re Dead range, is right on the money by the above standard, with 7.5 percent ABV hauling a tidy 75 IBUs – as bitter as the malt can handle, and no more.

There's a real depth of flavour right up front, first in the aroma (or as I like to call it, "nose flavour") and then from the very first sip. Rich resin and a bang of citrus swirl together with mango and red pawpaw that are so overripe, so soft and squishy and dripping, that they're difficult to cut and you're wondering whether to throw them in the compost, but can't bring yourself to because they smell so sweet and delicious. But these hop flavours aren't alone; sticky dark fruit cake and nuttiness are there in force (along with the tiniest touch of roasty malt), ready to meet the hop bitterness head on when it swings in like Tarzan.