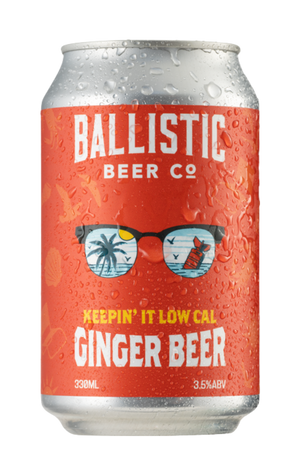 Ballistic’s Keepin’ It Low Cal Ginger Beer is exactly what it sounds like: a ginger beer that the brewery is touting as being low in calories and carbs. In their words, “over 60 percent less carbs & sugar compared to other mainstream alcoholic ginger beers.” It’s got a tidy sweetness and a kick of spice from Buderim ginger, and each tinnie comes in at less than a standard drink.

Note this is the same recipe as the After 5 Brew Ginger Beer they released in collaboration with 9 to 5 The Musical, which we wrote about here, and is now part of Ballistic’s core range.