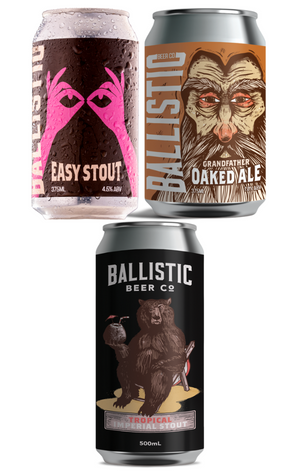 Clearly they're embracing winter at Ballistic, with a trio of warming beers arriving in quick succession. When it comes to Easy Stout, the brewers have certainly delivered with this one. A session stout with a seven-part malt bill for a layered drinking experience, including oatmeal to provide decent body. It’s not at all thin, weak, or one-dimensional; there’s a gentle roastiness (or a roasty gentleness?), a wave of unlit cigar, and enough coffee and spice to add depth. And yet it lives up to its name. Easy Stout is an easy stout.

And it turns out that’s exactly what people are looking for in a Brisbane winter; the fact that the online allocation of Easy Stout sold out in its first week of pre-orders tells you how keen Ballistic fans were for a session stout.

Diehard fans of the brewery have also been clamouring for the return of Grandfather Oaked Ale - an English-style old ale aged on American oak that Ballistic brought out in their original line-up of beers, and have brought back as a winter release from time to time. Ballistic even asked their Facebook followers if they’d prefer a ‘new and improved’ version, but no - the people cried out for it remain exactly as it was.

I remember tasting this beer in 2016, right back before the brewery had opened its doors.* It was glorious then, and it’s glorious now. It pours the burnt gold, almost rusty colour of maple syrup, and brings the taste of all kinds of sweet treats. Buttery vanilla shortbread. Coconut biscuits crumbling in your mouth. Sticky date pudding with butterscotch sauce drizzled everywhere. And it all wraps up with the tiniest hint of alcohol warmth building in your chest.

Finally, stepping away from this traditional number, we have an imperial stout hopped with Sabro and marketed with a bear on the beach drinking from a coconut.

Why? Why not? There are no answers to either of these questions.

First released as part of My Beer Dealer’s 12 Imperial Stouts of Xmas ’21, the Tropical Imperial Stout is a mix of familiar and unfamiliar. The deep roast and bitter chocolate and oily espresso were expected… but then the hops bring a certain je ne sais pas. A distant hint of dark woodiness, like someone opened up a camphor chest somewhere else in the house? A herbal, perhaps sarsparilla-y character, nudging the peripherals of your palate? A memory of charred coconut from that time you were in Bali? A bitterness that refuses to disclose whether it’s coming from the hops or the roasted grains?

I didn’t know what to expect from this beer. I’m still not exactly sure what I got with it. I liked it. I think. Stop asking me questions. I don’t have answers.

*I’m sorry, that was far more ‘Back in my day…’ than I intended. Perhaps I’m the real grandfather here.