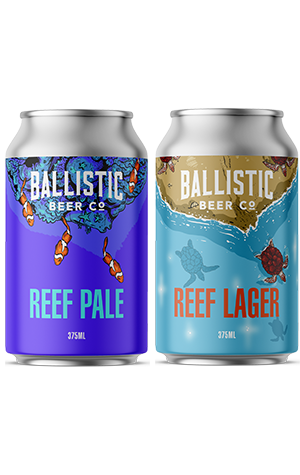 Since expanding up north earlier this year, Ballistic haven’t wasted any time getting in and helping out - they’ve recently released Reef Pale and Reef Lager to support conservation and restoration efforts along the Great Barrier Reef.

For every can of Reef Pale and Reef Lager sold at Ballistic Whitsundays, Ballistic is donating 10c to Eco Barge Clean Seas, who will use the funds to feed and medicate sick and injured turtles at the Whitsundays Turtle Rescue Centre. A QR code on the cans gives more info on EBCS, as well as a Spotify playlist from Ballistic to pair with the reef beers.

The beers themselves are exactly the kind of refreshing drops you’d want in that part of the world, and they’re both clear as the shallows at Airlie Beach on a still day. The Reef Pale is a tropical pale ale that smells of sweet mango and packs a nice weight of fruity flavour for such a sessionable beer. The Reef Lager is more laid back, with a touch of sweet malt character and a light bitterness standing like two palm trees with a hammock strung up between them.

Since the beers are for Ballistic’s new locals to call their own, they’re available exclusively in the regional areas around Ballistic’s new northern venues (and on the online store).