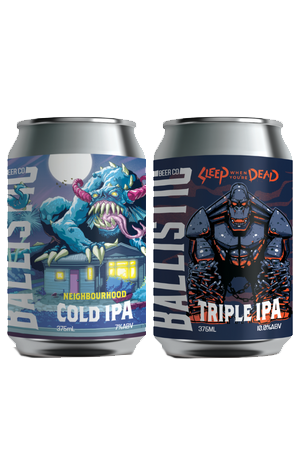 “Welcome to the neighbourhood!”

You might expect this kind of greeting from a Ned Flanders-type character, but the first entry in Ballistic’s Neighbourhood Collab Series greets you with a hellish alien monstrosity. (Though for all its terrifying ugliness, it seems to be quite harmlessly hanging out on the rooftop, reminding me of the aliens from my favourite scene in Men In Black.)

This series is a chance for the brewers at Ballistic to collaborate with international brewers, and its opening Neighbourhood Cold IPA is a partnership with New Zealand’s Boneface Brewing.

A cold IPA is a wonderful way to show off the charismatic flavours of NZ hops - this one is packed with Motueka and Nelson Sauvin. It somehow throws the full fruity force of these two varieties - a rich experience of tutti frutti bubblegum sticks, zingy citrus and white wine grapes - while also settling into a soft earthiness reminiscent of Motueka’s forebear, Saaz. While the malt profile is lean, it brings a nice full mouthfeel. It’s not thick, but just sturdy enough to keep everything going. Like a lithe gymnast, or a wiry removalist; the muscle is functional, not for show.

Speaking of gymnasts, this next beer sticks the landing, looks up at the scorecards and sees 10s all round - 10 percent ABV and 10 times 10 IBU (that’s 100 IBU, if maths isn’t your strong suit).

If Sleep When You’re Dead Triple IPA sounds like it’s a big step up from the previous IPA, let me assure you that it’s surprisingly drinkable. Very, very drinkable. It’s like a fruit salad with fresh melon keeping it bright and refreshing. Even when some dankness enters the mix, it’s not with an aggressiveness that West Coast IPAs are known for - let alone what triple West Coast IPAs are known for. It’s more like a well-meaning relative tossed a few pine needles in with the fruit salad for texture.

The mechanical King Kong on the label has been successfully restrained (unlike its organic counterpart from pop culture) and so have the booziness and bitterness of this beer. Sure, some warmth and bite settle in eventually, but each sip keeps presenting more fruit character as well (I got some lovely pineapple towards the end) so everything is in a friendly balance.

But remember: this is still a monster. Try not to accidentally drink a four-pack of these; it would crush you.