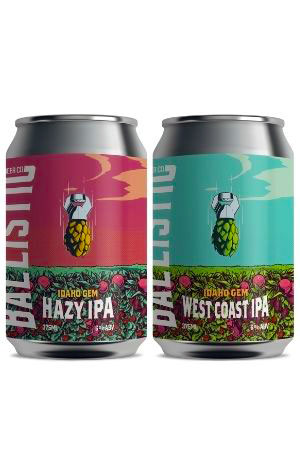 I’m an opinionated person, so I’m not usually one to tiptoe around, issuing disclaimers. But I want to begin this write-up by playing the "taste is subjective" card. I do this because this is my first experience with Idaho Gem hops – and it’s in two different single hop IPAs, which is an ideal way to sample a new hop variety – and I’m not picking up the described flavours.

It’s worth pointing out that Idaho Gem is a bit of a rarity in today’s beer scene. Rather than being bred by scientists, this hop variety was found by Gooding Farms in Idaho. In a world where hops are being bred like designer showdogs to have certain characteristics, it’s interesting when people "discover" a hop with unknown genetics that’s desirable to throw into an IPA.

And desirable it is: everyone’s talking about the distinct cherry notes Idaho Gem throws off. Yakima Hops describes the variety as “a standout hop that is just bursting with bright red cherries” and having “bright and forward impressions of fruit candy”, and Ballistic’s tasting notes are similar, adding for these two single hop IPAs that it brings "underlying floral and resin notes”.

I found the Hazy IPA to be clean and soft, bright and bitter. There were some fruity notes, a little pineapple, a little citrus – and look, if I’m reaching, I perhaps tasted a hint of cherry skins, and a smidgeon of fortified berry wine with the sweetness toned right down.

When it came to the West Coast, some hefty malt kicked in; this beer tasted as golden as it looked, like the honeycomb from the inside of a Violet Crumble. The fruit eased off a bit, that floral and resin showed up, and the arresting bitterness I’d perceived in the hazy (which, now that I think of it, was surprising for its 35 IBUs) came back with a vengeance in this West Coast: it landed faster, hit harder, and stayed longer.

These IPAs were tasty and went down more easily than most beers this bitter. Was it the Idaho Gem that made that happen? I don’t know. I’d be intrigued to see what happens if someone bangs Idaho Gem into a single hop pilsner.

But I know I want to drink more of this. And I will.