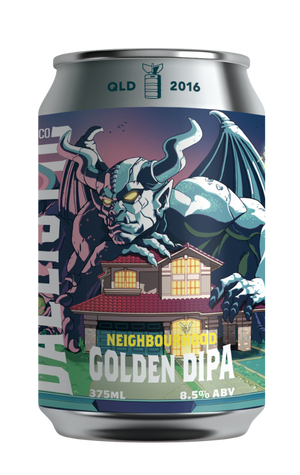 There are so many good, fresh local beers around that I can’t remember the last time I had a beer from the US. Which means I haven't had an IPA from Stone Brewing in probably four or five years. But this collab between Ballistic and Stone captures that brutal San Diego spirit that Stone injects into each of its beers.

The label shows the Stone gargoyle protecting a house from an angry swarm of demon hops, but I suppose those hops had to go somewhere, and they all made their way into this brew. I don’t know exactly what makes this a double golden IPA, but it carries big West Coast vibes with some added fruit salad character.

US hop varieties El Dorado, Strata and Amarillo bring face-whacking notes of grapefruit rind and sticky pineapple and tropical fruits, while the Aussie Veloria malt from Voyager throws in the chewy and creamy flavour of jersey caramels. Experimental HBC682 hops bring a thumping dry and earthy bitterness, and it’s a bitterness that hovers for as long as it wants. The only thing that seems to budge it is the alcohol flavour that builds as the beer warms up - from subtle, to smooth, to assertive.

If you’d like to hear something about this beer from Stone Brewing, check out this video. But that should be secondary to shoving some of this down your face hole.