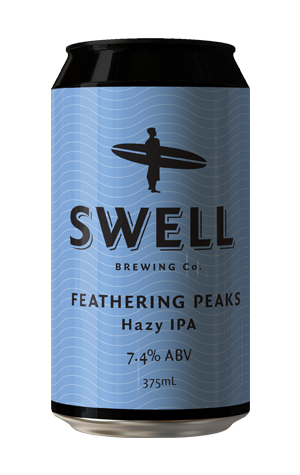 Swell’s surf-referencing series continues with Feathering Peaks, an ode to the next set of white caps on the horizon, getting closer as you float atop your board, anticipation and adrenaline building. The McLaren Vale crew have decided such an experience is best represented in beer form as a hazy IPA, one that makes a feature of Idaho 7 and Simcoe hops, themselves floating atop ale and Vienna malts with some rolled oats and wheat in the mix as well.

The beer pours a quite cloudy light orange with a bright white, heady (or should that be feathery) peak. Pulpy, syrupy tropical fruit follows – namely juicy mango, papaya and passionfruit – with a little floral tickle on the end. The thick, full-bodied nature of Feathering Peaks continues to bring those fruit flavours, supported by a mild bitterness, while the initial sweetness makes way for a finish that's a touch on the dry side in an IPA that, at 7.4 percent ABV, is probably best enjoyed when you've had your fill of the other sort of feathery peaks for the day.