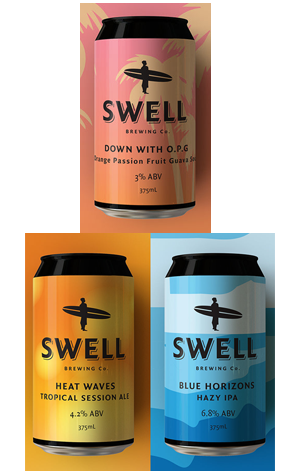 The start of March sees three newbies flow from McLaren Vale’s Swell as they raise a final hurrah to the summer season with some last-minute tropical refreshers. The smallest of the bunch is the 3 percent ABV kettle sour Down With O.P.G, featuring a flurry of orange, passionfruit and guava added to a light malt base. An ode to the 90s when the brewers remember waking up on a Saturday morning and turning on RAGE. While sipping tropical fruit juice with some mates, they reminisced about hearing Naughty by Nature’s O.P.P. play and quickly punching record. The beer required a slight tweak to the initials but the tropical fruit juice remains as tangy vitamin C orange juice vibes work well with a decent passionfruit showing and a touch of earthy guava. Add in some zingy sourness, a decent mouthfeel for a lower ABV, and a spritzy carbonation that finishes it off and you've got suitable company as the summer heat slowly fades.

You know when it's a scorching hot day at the beach and when you look into the distance you see shimmering waves from the heat? Luckily, the water and the waves are but a step away, or if you've planned ahead, an esky full of beers offers refreshment. Presumably, Swell imagine said esky full of beers like Heat Waves, a tropical session ale built upon a light grain / dry biscuit base ready for a smattering of papaya, lychee and passionfruit. The bitterness is restrained, supporting a little sweetness early before drying out nicely.

Blue Horizons Hazy IPA represents the ocean's calmer side: sitting out the back of the waves, gazing towards a calm, blue horizon, waiting in anticipation for the next monster set. In beer form, such a moment has been reimagined via Mosaic, Amarillo and Ekuanot Cryo hops in a light, fluffy liquid that allows the juicy tropical fruits to crash across your senses. Some orange sweetness matches the ripe mango to taste, creating a perceived sweetness that edges at the palate throughout.