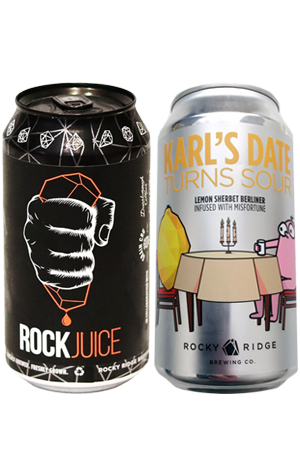 Rocky Ridge’s eighth Rock Juice, the heavily hopped DIPA whose every release is hotly anticipated, has very much split the room, instigating a heated debate among hopheads. Some have lauded the beer as a complex, ambitious and trend-setting interpretation of the double IPA style. Others, however, are touting it as the least impressive Rock Juice since it debuted four years ago.

The division doesn’t come down to a quality issue, however: the wedge seems to be the "avant-garde" way the brewers chose to impart hop flavour and aroma into the beer, employing new technologies in the form of terpenes to develop bold citrus flavours and aromatics.

Terpenes are aromatic and flavour compounds found in plants, and when extracted from hops and put into liquid form they can contribute a complex, concentrated hop flavour. In the case of Rock Juice V8, those compounds are citrusy in nature, imparting strong lemon rind and sherbet like characters from the Citral and Limonene variants. Paired with fresh Aussie, Kiwi and US hops, including El Dorado and Vic Secret, the result is a lemony fruit salad of flavours and aromas, some of which can be perceived as clashing and unfamiliar.

Fermented with London Ale 3 and brewed with triticale and oats for haze, Rock Juice still has many of the hallmarks as its predecessors: a creamy, long-lasting mouthfeel, hazy appearance and residual sweetness that hides much of the 10 percent ABV, all present and confirming that, despite some confusion, what’s in the tin is certainly "The Juice".

The question of how this experimental Rock Juice fairs, and whether or not it is a success or failure, will ultimately come down to the public’s reception. That said, if you were judging its worth based on the hype and chatter, this one has certainly outdone any batch before it.

In short, if you like lemons, chances are you'll love this. If you're not a fan of lemons, well...