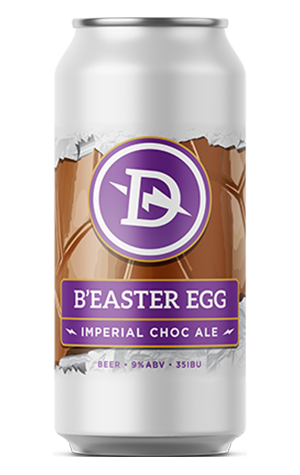 Dainton Beer are no strangers to waltzing through the confectionary aisle to find inspiration for beers. No strangers? Who am I kidding? Dainton don’t just spend more time down the confectionary aisle than most brewers but are there more often than Willy Wonka himself before Slugworth started stealing the man’s ideas and he became a recluse who’s uncomfortably indifferent to the maiming of children. (Warner Bros, get in touch: I have many ideas for your dark and gritty Wonka prequel and any future Wonkaverse properties).

So, when a holiday rolls around where chocolate is a focus, we should really expect the award-winning brewery to come up with something sweet, and that something sweet is B’Easter Egg, a 9 percent ABV Imperial Choc Ale. For a beer that’s so soaked in chocolate, it’s not quite as dark and stout-like as such rich releases often are (or as dark as my Wonka movie ideas for that matter). Instead, it pours in the glass closer to amber but the slightly light complexion doesn’t mean it’s in any way light on chocolate.

B’Easter Egg is an incredibly smooth and silky beer that's more chocolate mudcake than Easter egg in which the 9 percent ABV provides a touch of warmth, and where notes of caramel and a slight hint of tobacco swirls through the glass. It’s a chocolaty beast worthy of Wonka himself, assuming the man made Easter eggs.

Buy my screenplay to find out...