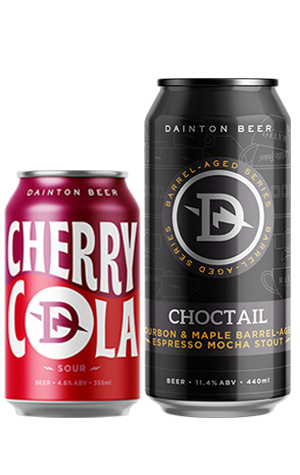 After releasing a ginger beer and alcohol-free XPA in quick succession, you might have wondered if Dainton were going to approach brewing a little differently. Well, these two suggest you would have been wrong. Cherry Cola has certainly hit the nail on the head when it comes to turning a soft drink into beer, with the sour filled with fancy flavours of cola with a touch of juicy cherry and a tart finish.

Meanwhile, the brewery say Barrel-Aged Choctail is among their most indulgent releases yet and they're certainly not wrong. The beer started life as their much-loved espresso mocha stout which has spent months resting on maple syrup and bourbon barrels. It means there’s a lot going on but for such a big beer, it’s also incredibly drinkable with a swirl of coffee, vanilla, oak and caramel all coming together seamlessly for a rich beer where you can finish the whole can.