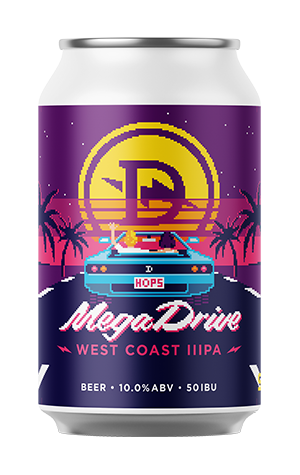 They make a lot of IPAs at Dainton but over the last couple of years, Overdrive has been a house favourite among the brewers. The West Coast IPA joined the brewery’s core range in October 2022 and quickly enjoyed golden success at The Indies, while the can comes clad in a design that makes you feel like you're stuck inside the software world of Tron.

MegaDrive is a celebration of that beer’s second anniversary and continues Overdrive’s 1980s theme with its 16-bit graphics driving straight for the Dainton sunset. At 10 percent ABV, it’s certainly a beer that deserves both the IIIPA title and the "mega" in its name but while it might one big West Coast, it’s not as nearly as difficult to beat as 1992's Kid Chameleon. Sure, MegaDrive is mouthcoatingly resinous, piney and filled with citrus that sits somewhere between orange sherbet and grapefruit rind. But what you won’t find is the kind of boozey heat you might expect in a beer that's so big, lean, dry and bitter and ultimately, the anniversary ale is a beer of balance.