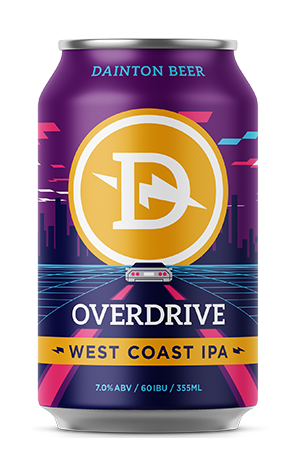 Down at Dainton, they already have a NEIPA, an imperial NEIPA and a hazy IPA in their core range so this new addition to the brewery’s permanent lineup offers both a slice of familiarity and a point of difference. The West Coast IPA named Overdrive is coated in familiarity actually, with the tin one part Tron, one part Drive and another Back To The Future.

For lovers of West Coasts of old, you too can be transported in time, for Overdrive is very much about two things: pine and bitterness. Pouring orange, it’s resinous, piney and has a slightly oily orange character, plus a slightly chewy malt profile and a brash and grippy bitterness. Taken together, this is an IPA that'll help launch your palate into overdrive.