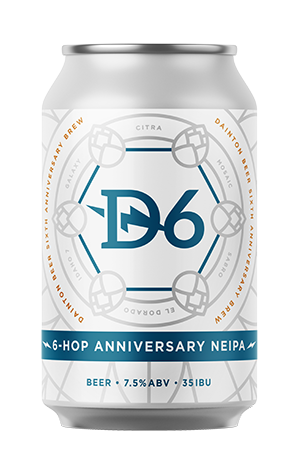 Fortunately for Dainton Beer’s sake, there are a lot of hops. Once again, to celebrate the anniversary of their Melbourne brewery and taproom opening they've brewed a beer in D6, with the annual NEIPA a fitting approach for a brewery that makes so many hoppy releases. But, as everyone knows, when you start a beer series you have to keep doing it until the end of time, so luckily, for the Dainton team, they should be safe to be going until at least the year 2192 before they run out of hops.

The follow-up to D5 has a slightly lower ABV compared with its predecessor but otherwise, quite closely resembles it and adds Idaho 7 to the hoppy birthday lineup of El Dorado, Galaxy, Citra, Mosaic and Sabro. The result is a full-on barrage of fruit with mango, orange and pineapple juice, passionfruit and stone fruit all launching from the soft and luscious beer at once.