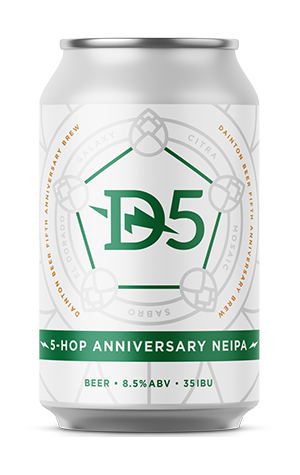 Their story might go back a little further, but September 2021 marks five years since Dainton Beer opened their Carrum Downs taproom. To celebrate, they've created a fitting anniversary ale. They might brew practically any beer style under the sun but their hazy IPAs attract no shortage of attention – which is pretty understandable given the era we're in. So, to mark five years they’ve brewed an 8.5 percent ABV NEIPA featuring five of the coolest kids in the hop world: El Dorado, Galaxy, Citra, Mosaic and Sabro.

So, while it might be sad that D5 isn’t the fifth instalment of The Mighty Ducks franchise (considering there was no D4, it would be a movie with some explaining to do too†), it is a beer with the kind of wide mix of juice-led flavours that excites so many people. First up is nectarine and candied citrus from on the aroma, while on tasting that’s joined by a tropical mix of papaya, prickly pear, melon and tangerine. Though it pours pale yellow and about as thick as you’d likely want your beer to look, it’s not just a juice bomb – there's also being a bit of bite at the back of the palate and a slow-building bitterness.