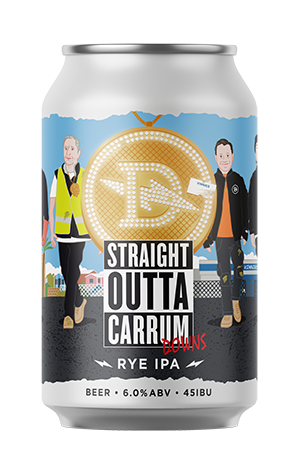 Dainton Beer launched with a hoppy, rye-filled IPA and, while this release isn’t red, it feels like a fitting tribute for the brewery to make for IPA Day. That celebration kicks off on August 4, and given they’ve named it Straight Outta Carrum Downs, the beer’s as much a tip of the hat to West Coast rap as West Coast IPAs.

While I consider myself just as capable of writing about late 80s rap as hoppy beers, it's likely not what you've come to this site for. Fortunately, if you're wondering how close a homage this beer is to the pioneering IPAs from that coast of America, then know you'll find plenty of pine, melon, grapefruit and lemon rind here. Straight Outta also drops more spiced, earthy and herbal flavours and, with both a bit of sweetness and a substantial bitterness, leaves you with a particularly tongue-coating IPA.