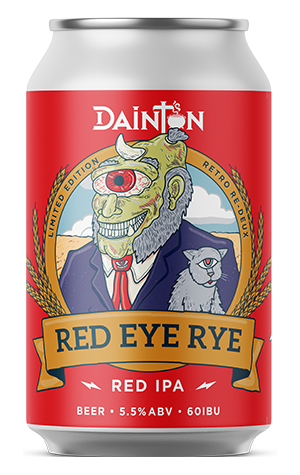 It might be shocking to hear but 2013 was an entire eight years ago. It was the year the word selfie was invented (in Australia, no less), Daft Punk released their last album (which makes you wonder what they’d been doing from then until their breakup last month) and it was a little bit easier to keep track of who was brewing what in Australia.

One of the new breweries to appear on the scene in that year was Dainton Family Brewery, a nomadic operation headed up by brewer Dan Dainton and his old man Kev. The beer they launched with was Red Eye Rye, a red IPA with a rather bizarre-looking creature on the bottle (as was their style at the time) that provided a glimpse into the madness that lay ahead from the future award-winners.

Four-fifths of a decade on, Dainton have brought back Red Eye Rye as a limited run, releasing it with slightly-tweaked artwork as a redux in cans, complete with a removable sticker on the label as a keepsake. As for the beer inside, it’s certainly one that tastes like it could have been first made in 2013. There’s a pronounced level of gripping bitterness that smothers the palate, with both rich strawberry jam and a subtler spice derived from the rye-laced malt base, plus pine and oily grapefruit from the hops.

It was a cracker of a debut, since when Dainton have gone on to exceed, one assumes, even their own aspirations, with major trophies in the cabinet and another major brewery expansion underway. What will the next four-fifths serve up?