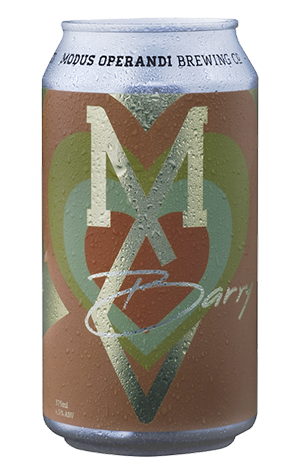 While Modus Operandi have focused much of their brewing on US-style hoppy beers (with plenty of Aussie tinkering), a quick look over their history shows that they’re willing to enter the ring with European styles as well – saison has set the pace from day one, there was a doppelbock to keep us company in the middle of a pandemic, and now here's a witbier to seduce us.

With a label reminiscent of Magnum ice creams and a description written like a love letter in gold script, your instinct might be to expect Barry to be a thick pastry stout with flavours as deep as the bass-baritone voice of Barry White himself. But this beer is less Barry White and more like the dream sequence from a 90s love song's film clip, complete with the hazy glow.

The citrus zing and candy sugar that excite on the nose soften as they hit the tongue, leaving the impression of gentle sherbet and a slice of banana bread you finished eating ten minutes ago. A fluffy carbonated tingle rolls straight through the mouth, teasing before leaving your mouth dry.

Forget candlelit nights as the ultimate romance; sit on a beach in Mona Vale and enjoy the warmth of the sun with the cool crooning of Barry.