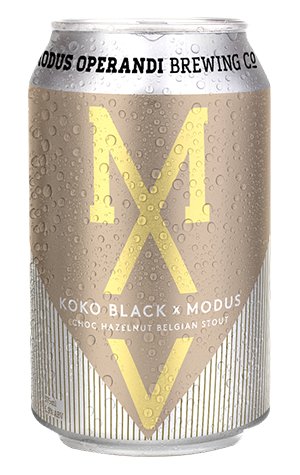 First things first: hazelnut is hands-down the single best flavour to accompany chocolate. You can argue with me if you like, but you’d be wrong.

It’s good to see that Modus Operandi realise this; when they teamed up with Aussie artisan chocolatiers Koko Black to make a chocolate stout, they included not just 50kg of Belgian couverture chocolate and cocoa nibs but also over 200kg of hazelnuts. It's not that the hazelnuts are a dominant flavour either but they’re certainly a nice touch given the point I've made above that I will not be expanding on.

This stout is for those who like their chocolate dark and intense. It smells of a rich chocolate cream like you’d find slathered between two layers of a disgustingly decadent chocolate cake, but it’s not a sticky and sweet beer; think more of an earthy cocoa flavour, with a tiny touch of tobacco and coffee. Delicate notes of fruit and nuts peek in as well; if you’ve ever had single origin dark chocolate and tried to discern the fruity subtleties of the cocoa that edge in among the familiar chocolate flavours, you’ll be right at home here. And when it comes to booziness, this one is 6.9 and tasting fine - a little shy of imperial territory, but enough for a pleasant warmth and thickness to carry the indulgence.

Since it’s an official Good Beer Week beer, Modus went about launching this beer with a bang - if you’re in Melbourne for the celebrations, you’ll be able to get this at independent bottle shops, at the Modus's home for the week at Good Heavens Rooftop, or at Melbourne GABS where the Modus crew will pour it for you from their renovated 1970 Leyland bus and you can take part in a chocolate and beer pairing masterclass.

Can’t make GBW? No problem - head to Koko Black’s online store to grab a hamper that includes a 4-pack of the beer alongside some nutty chocolate boxes so you can set up your own fancy chocolate and beer pairing night for you and your friends.

Or you can wait for the national roll-out after GBW is over, buy the beer through the usual channels and drink it in your undies with some Aldi chocolate on your chest. This beer is fancy enough to pick up the slack.