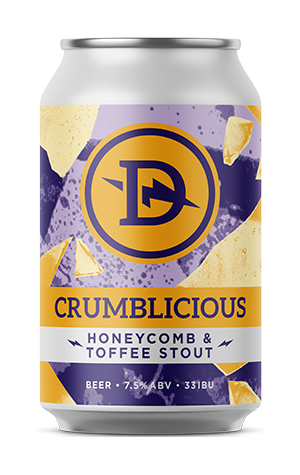 Dainton have long looked to the confectionary aisle of supermarkets for beer inspiration. It's an approach many breweries use and it's one that can both result in popular releases and the occasional letter from chocolate companies and both those things are true of [REDACTED]; a honeycomb and toffee stout that’s been rebrewed for winter 2021 and has a new name of Crumblicious.

Considering it contains what are basically two very similar types of sweet flavours (okay now that I’ve thought about the existence of honeycomb apple I accept that maybe there’s some nuance here), Crumblicious isn’t actually as overly rich as it very easily could be. Instead, there’s a level of bitterness at play that keeps that sweetness in check but of course, being [REDACTED]-inspired, there’s still quite intense swirls of honeycomb and toffee and chocolate all combining together to create a beer that tastes awfully similar to a chocolate bar that comes in a purple wrapper. I just can't quite put my finger on it...