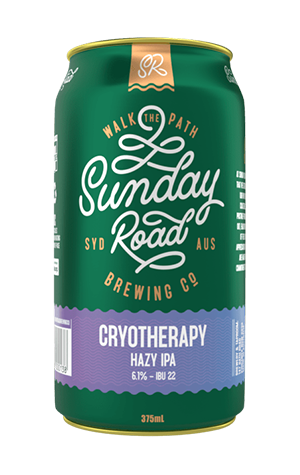 When head brewer Mick O’Rance first brewed Cryotherapy, it was a simple enough idea: choose an addition of Cryo hops as the central focus, then fill out the malt bill and hop bill with whatever other ingredients are lying around.

But it ended up being one of Sunday Road’s most popular beers; the brewery’s customers have slurped up every batch of the stuff almost as soon as it’s left the tank. Taking home the trophy for Best New World-Style Pale Ale at the 2021 AIBAs was just confirmation that this simple idea became something bigger and so it was added to the brewery's core range.

Cryotherapy isn’t the biggest and baddest hazy out there, but it ticks all the right boxes. It’s foggy all the way through and a triple dry-hopping of Cascade, Mosaic Cryo and Sabro hops has it pumping with mango, passionfruit, lime and a hint of pine and pineapple. It’s easy in the mouth and low in bitterness.

When you do see it, it’s worth jumping on quickly too because it still sells out fast.