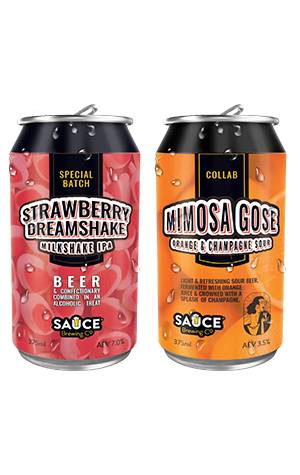 Sydney may be in the throes of lockdown, but a double release from Sauce Brewing is always a welcome distraction. The distraction in this case is a combination they've called Sweet & Sour July.

Strawberry Dreamshake Milkshake IPA brings the sweet. After a successful pilot batch of a similar beer earlier in the year, Sauce have brewed this to sate those all sweet-tooths (sweet-teeth?) out there. You don’t have to try very hard to smell the lollies on the label; strawberry puree, lactose and vanilla join to give a faceful of Allen’s Strawberries & Cream. But this beer doesn’t slip into one-dimensional; hops aromas hold their ground and in the mouth, you certainly get a sense of a hazy IPA that is neither sickly sweet nor overpowered by strawberry flavour. Enjoy the fruity hop character, then enjoy the aftertaste of that syrup that forms in the bottom of the bowl after you’ve sprinkled icing sugar on cut up strawberries.

In the same vein as their Bloody Mary Gose, Sauce have made another beer that straight-up tastes like the cocktail it’s named for. To make Mimosa Gose, Sauce partnered with the good folk from Nick & Nora’s cocktail bars, added orange and French bubbly to a gose base, and voila - a light cloudy orange appearance, a head that tastes like champagne fizz, the smell of freshly squeezed juice, and a hint of sophistication as you start boozing at brunch. While this is a ‘sour’ beer, it’s not at all a face-puckerer and in fact, it almost doesn’t even taste like a beer. The salt of the gose gives a dry finish but the first three-quarters of the drinking experience is mimosa through and through. Drink it from a dainty champagne flute and tell people it’s not a mimosa gose unless it’s made in the Mimosa Gose region of Marrickville.