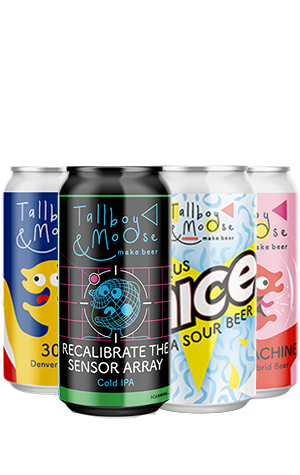 Well, they certainly aren’t slowing things down at Tallboy & Moose, releasing this quartet of tins in quick succession. 303 Denver Lager is a beer inspired by Tallboy brewer Mike’s hometown, with the beer spending eight weeks slowly conditioning and built for warm days and cold nights. Made with both Vienna and pilsner malts, the deeply copper-coloured beer throws out a mix of biscuit, toasted and nutty malt flavours, while the Cascade and Motueka hops bring a balancing bitterness, plus a floral touch to a beer that certainly fits well for those sunny days or chilly evenings (AKA Melbourne spring).

Next up is the brewery’s foray into the world of cold IPAs, which by now we may well be able to call a craze. Recalibrate The Sensor Array uses Talus and Eclipse hops along with pilsner malt and lager yeast to create a lean, dry and bitter beer that ties together tropical flavours of pawpaw, pineapple and passionfruit with pine and sage.

If those two aren’t warm weather appropriate enough, perhaps Citrus Nice Cola is more your style; a beer that builds on the brewery’s Nice Cola, which you can read about here but, in short, tastes more of fancy cola over dark-fizzy-drink-with-a-red-and-white-label. This springtime update channels the act of throwing a slice of lemon in your glass by adding a big squeeze of grapefruit, lemon and yuzu to create a herbal sour beer with an extra lift of citrus.

Finally, there's Noise Machine, a collab with the urban winemakers at Noisy Ritual which is a rosé and beer hybrid. It takes a white ale base and combines it with Dolcetto grape juice to make a lightly tart beer with tannic characteristics in which fresh, juicy red wine notes come together in a beer that looks a whole lot like rosé in the glass too.