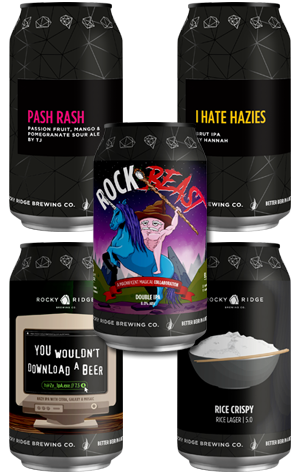 If we judged our breweries on the number of different styles they brewed, Rocky Ridge would be one of those dominating the Australian craft scene. We tend to judge breweries on their quality, however, and that’s an area Rocky Ridge also happen to thrive in, with their consistency as noteworthy as their lengthy and diverse tap lists. In February 2022, five new beers dropped for punters, each as thirst-inducing as the next.

To start with, an internal battle has been brewing between taphouse legends and good vibe suppliers TJ and Hannah; the resultant beers – the 6.5 percent ABV passionfruit, mango and pommegranite sour ale Pash Rash (by TJ) and I Hate Hazies, a 7.6 percent ABV Brut IPA (by Hannah) – pose only one question: who did it better? Given the polarity of the styles, a winner is hard to decide. TJ’s fruited sour is light, tart and refreshing with subtle, fresh fruit characters persisting, while Hannah’s Brut, although paying homage to a style easily forgotten, is particularly memorable with its clean, tight flavour profile of citrus fruits and floral aromatics atop a crisp base beer boosted with champagne-esque bubbles.

On the other end of the brewing spectrum lands Rock Beast, an 8 percent ABV double IPA brewed in collaboration with Blasta – and You Wouldn’t Download A Beer – a 7.5 percent ABV hazy IPA brewed with Citra, Mosaic and Galaxy hops. Both are decidedly hoppy and robust with the former, inspired by the iconic “You wouldn’t steal a car’ anti-piracy public service announcement, giving consumers the opportunity to download a free beer from the Rocky Ridge Taphouse via a QR code, making for a quality beer backed by impeccable marketing.