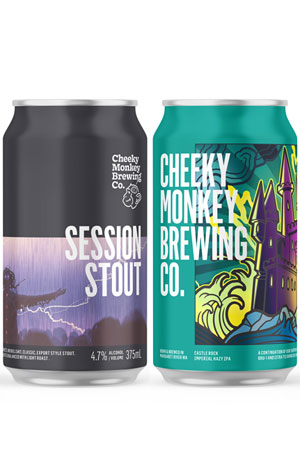 Although perhaps only a temporary exit from the thick, juicy and lactose-laced beers for which they’re renowned, Cheeky Monkey's 2022 winter seasonal Session Stout pointedly heads into restrained territory: no adjuncts and no, ahem, monkey business…

A firm roast is the defining factor in this lacy, pitch black stout. Coffee, a black tea-like bitterness and some soft cocoa are all bolstering flavours, while there’s just a touch of malt-derived sweetness to bring some balance and increase drinkability; a medium-long finish features some lasting sweet dark chocolate and toasted, oily nut character.

It represents a shift away from the in vogue "decadent" [I told you that word was banned for the rest of 2022, Jono – Editor] stouts of the now, instead aiming to fill a void for those who like their stouts approachable and easily digestible.

Well, I did say "temporary exit" above... Playing to their strengths as a brewery that knows how to harness the haze, here's another hazy IPA of note in their ongoing and popular Surf Break series. Named after Castle Rock – a protected surf break with notoriously good swell – this IIPA features a stack of Mosaic, Citra and Bru-1 hops. The aroma is dense with ripe mango, sweet papaya, robust citrus fruits, and mango. On tasting, expect much the same, all straddling a luscious, semi-sweet profile, a creamy mouthfeel, though not excessively so, and some well-integrated hop bitterness – all just hanging on after each sip, including a touch of heat from alcohol.

Castle Rock is another fine hazy IPA from Cheeky Monkey, as expected, abundant in hops and alcohol, meaning it would be wise to keep an eye on how many you have, given its moreish character.