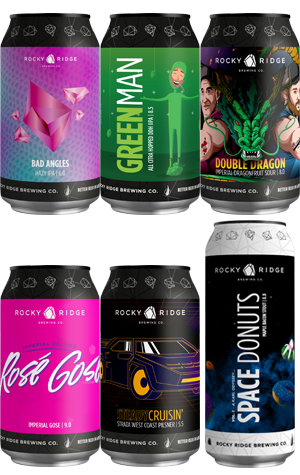 Each year, Perth’s popular Froth Town festival sees stacks of special beer releases. In 2022, it saw Rocky Ridge – who hosted the main stage – it was never going to be enough to put out just one new Froth Town frothy; instead the team from Jindong, in typical fashion, opted for half a dozen, initially tapped every hour on the hour at the festival and now available through their website and Busselton taphouse.

Across the six releases, they cover an array of styles. For the hop heads, Bad Angles (6.0%) is a hazy IPA loaded with Idaho 7, Motueka, Rakau and Nelson Sauvin hops that offers peak drinkability thanks to gentle bitterness and a touch of sweetness. Keeping with hops, Green Man (8.5%) is an all-Citra party where, as expected, Citra-derived notes of fresh and dried citrus feature heavily alongside a firm bitterness, some pine, and good balance.

For the sour-sippers, Double Dragon (8.0%) and Imperial Rose Gose (9.0%) are both sizeable yet approachable offerings. DD is fruit-heavy with strawberry and dragon fruit starring to yield sweet berry and tangy kiwifruit, underpinned by a generous sweetness. RG, on the other hand, leans more acid-driven, with subtle wine and gritty grape character atop the sizeable ABV.

The final two of Rocky Ridge’s Froth-tastic sixer fall either side of the craft beer colour spectrum, with Steady Cruisin a West Coast pils (5.5%) in which Strata dominates with herbal and sweet fruit salad notes alongside an uber crisp, slightly sweet and grainy base beer. Space Donuts (8.0%), however, is in darker territory and features sticky maple syrup and smoked malts, giving this stout a bacon like edge – minus the meat.

Releasing multiple beers at once certainly isn’t out of the ordinary for Rocky Ridge, neither is releasing six completely different beers in unison, as they set out to prove yet again that you can have both quality and quantity.