Spring is well underway and it's also well and truly time for the latest update from The Crafty Cabal, our beer lovers bonus scheme. Festival season is already upon us, which means we'll have plenty of tickets to give away to Cabalistas.

A big thanks are in order to the Aether crew for showing us and Cabalistas around their new Brisbane HQ last month. And cheers to Burnley Brewing (pictured above) for giving 25 Cabal members a sneak peak of their Oktoberfest celebrations (which are still running until this Sunday if you fancy tucking into a heap of German style beers).

Anyway, as for what's coming up, if you fancy a night in the company of Garage Project exploring all things wild and mixed fermentation, Cabal members get a bonus bottle of the Kiwi legends' Muse Lemon & Hibiscus Wild Ale if they attend next week's Wild Feast at Slowbeer – details here. Looking beyond that...

Into The Barrels With Future Mountain

Future Mountain Brewing & Blending not only gave Reservoir its own brewpub when they opened their doors earlier in 2019, they gave the Melbourne suburb one of the city's most fascinating breweries too.

Founders and brewers Ian and Shane specialise in creating traditionally-minded farmhouse style ales and playing with barrels, bacteria, blending and fruit. They're inviting Cabalistas to join them for an intimate peek into the heart of the operation to share some of their favourite beers, pulling samples from barrels and telling their unique story.

There's just 25 spots available, at a ridiculously good value price of $25 per person, which covers all beer samples and food being served during the event. Just head to your member's area now to book.

On the weekend of November 2-3, Healesville Sanctuary is hosting Hop Fest, a beer, cider and food event with all proceeds helping save the brush-tailed rock-wallaby from extinction. It's a chance to celebrate the Yarra Valley’s craft brewers and small batch cider makers within the beautiful grounds of the sanctuary.

In total, ten local drink producers will be in attendance and you can read more about the event here.

We've got tickets worth $49 to give away to Cabal members – head to your member's area to enter a ballot that ends on October 21. Or you can get your hands on one by signing up to the Cabal here.

Get Yourself To Geelong

The Great Australian Beer Festival turns eight in 2020 and is doing so at a new venue. After seven years at the Geelong Racecourse, the festival is moving into the heart of the city, taking up residence in Johnstone Park on January 18.

The festival has grown to the point where it attracts up to 5,000 beer lovers each year and there will be 40 interactive themed bars and 200 beers and ciders to enjoy on the day.

The festival has always been about more than the beer and in 2020, Sneaky Sound System and Kim Churchill will take to the stage along with a whole host of local acts.

We've got a stack of tickets to give away to Cabalistas; again, hit your member's area if you're already signed up or here to grab one as a welcome gift.

Congrats to Ben Davies, Anthony Morgan, Kyle Campbell, Alex Kelly and Andy Lineham as each will be getting their hands on a case of Rocky Ridge beers as winners in the just-finished beer ballot.

Next up is FogHorn Brewery, who have been kind enough to offer our members mixed cases of their first four beers to make it into cans. The Newcastle brewpub is steered by Shawn Sherlock, formerly head brewer at Murray's and one of the country's very best, so it's exciting to see those beers make it into cans.

Cases will include the flagship Young Americans IPA, trophy-guzzling Sligo Stout, plus the sessionable Newy Pale and Summer Ale.

Just head to your member's area to enter the ballot; we'll pick winners in early November and notify them via email.

Aside from that, there’s a few new ongoing offers added since our last update:

And, while we've said it before a while back before deciding to make a few more changes, we can say with certainty that the new version of The Crafty Pint app will be live any day now. It features integration of The Crafty Cabal – members can log into the app and access pretty much every aspect of their membership: brewery and venue offers, competitions, events without leaving the app.

It makes for a smoother user experience and also means you're less likely to forget to take advantage of an offer if you're using the app to make your way through the beer world. We've still got more we want to add to the app, but this will be a huge boon for Cabalistas! 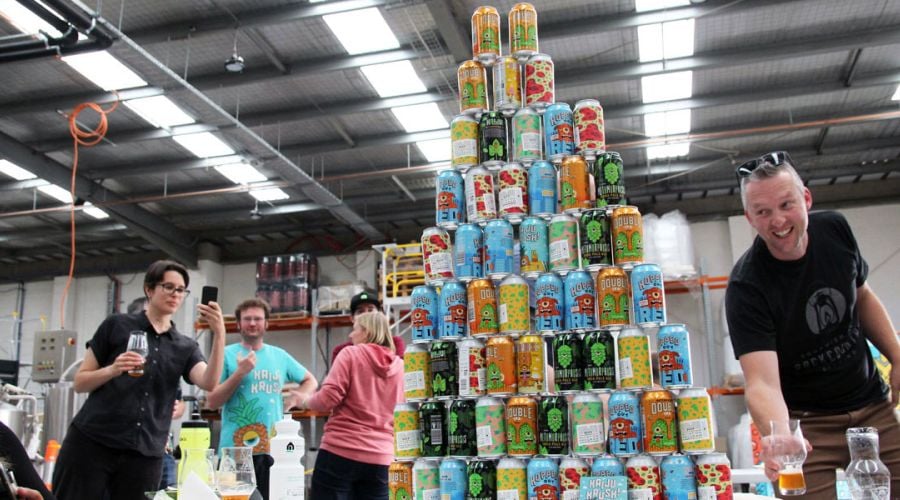