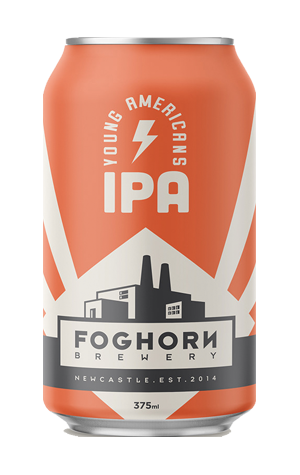 In 2015, the NSW Government made a bizarre decision to remove the last three stations on the Newcastle rail line and replace the service with on-street light rail. While it definitely had nothing to do with opening up a large swathe of prime land for development, there was a lot of uncertainty as to how it would affect local businesses.

One thing is for certain, however: the Hype Train never stopped at FogHorn Brewery anyway. Co-owner and head brewer, Shawn Sherlock, knows exactly what he’s about and that thing contains no lactose or pastry.

Shawn’s Young Americans IPA has been a favourite of Novocastrians since well before it won a gold medal at the 2017 AIBA awards. Thankfully, in a boon for FogHorn fans from further afield, the flagship IPA has been made available in cans from spring 2019 with a view to having it stocked in Sydney and beyond.

Obviously having a pint at the Newcastle brewhouse remains the best case scenario but the freshly canned version is a godsend. With so many IPAs in 2019 leaning towards the juicy and soft end of the spectrum, getting your hands on a balanced, more traditional American IPA is a breath of fresh air.

Young Americans remains the sublimely hoppy beer that brought home the biccies in 2017. It’s loaded with perennial US favourites Simcoe and Citra added throughout the brewing process and finished off with New Zealand Wakatu flowers in the hopback to give that glorious, tongue-covering, resin stickiness. There’s also actual malt character to balance the assertive bitterness which presents a naturally hazy golden-honey colour. It’s a delicious and comforting reminder of what an American IPA can be.