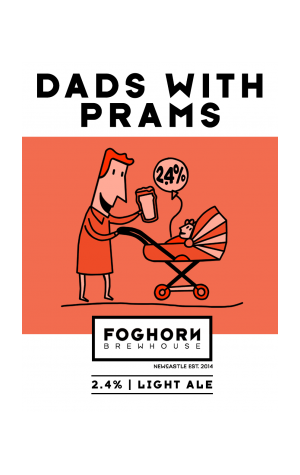 Way back in 2011 (which is pretty much Prehistoric times in the contemporary beer world), Shawn Sherlock debuted Retro Rocket, an IPA with a punchy bitterness that registered a mere 2.8 percent ABV. Session IPA wasn't really a term back then, but clearly that was where his head was, with the beer proving that, while he might have built a reputation upon bigger beers, he could play at the smaller end too.

At FogHorn they don't come smaller than Dads With Prams, the brewpub's 2.4 percent ABV light beer. Described as "a hoppy pale ale with a difference" and featuring his favoured Kiwi hops, it's one of the lightest craft beers in Australia, with the brewers calling it: "Light bodied, crisp and very drinkable but still with good aroma and flavour ... perfect for when you need all the flavour but less of the booze."