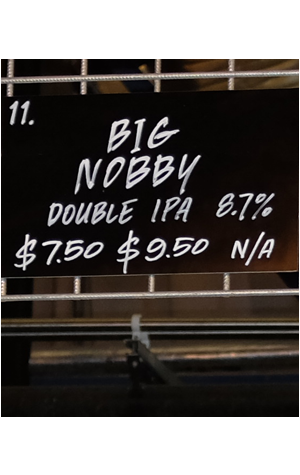 FogHorn Brewhouse turned three in April 2018, and what better way for award-winning chief brewer Shawn Sherlock to mark the occasion than to tap a brand new, one-off double IPA, a style of beer he's delivered with aplomb many times over his career. Better still, he invited the public to name it in an online competition, with "Big Nobby" the eventual winner – not, of course, a reference to Shawn but instead to the famous Newcastle landmark Nobby’s Head, a headland that is located on the southern entrance to the harbour.

This birthday beer has been loaded up pretty much nonstop with Australian, Kiwi and American hops – both fresh hop cones and pellets – making for a very modern take on the DIPA style, with a grain bill designed to give the beer a little colour without much in the way of sweetness from the malt.

Expect to find tropical fruit salad, a touch of grapefruit and a tongue coating resinous character from the hop flowers within this well balanced beer. At more than 100 IBU [International Bitterness Units] it has a lingering bitterness, and is what Sherlock calls an “in yer face double IPA, that’s not so hardcore that you cannot drink it.” Big Nobby truly represents what FogHorn Brewhouse is trying to achieve: the freshest and best beers in Newcastle.