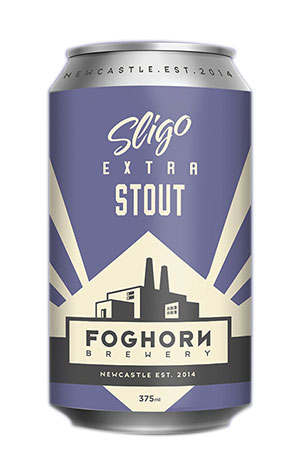 The first time I encountered Sligo Stout was via a sample sent to Crafty Towers – poured from the brewpub's taps into a PET homebrew bottle and couriered interstate. As soon as the opaque black-brown liquid hit the glass and the aroma hit my nose, I thought: "Now that smells like a Sherlock stout."

Given the only beer The Crafty Pint has ever made on a commercial scale with anyone was a stout with Shawn and then Murray's brewing partner Ian Watson (OK, a smoked one with Belgian yeast, mussels and oysters in the mix), we hopefully have a reasonable idea what such a beer is, and they're generally things of beauty. A while later, when taking friends through FogHorn, we'd sampled most of the beers on tap when Sligo came out; "Now that is my kind of beer," was the immediate reaction of one.

So what's the point of these recollections? Well, that the beer will likely win you over in a hurry – as long as you're not afraid of nigh on 8 percent ABV dark beers that leave nothing in the locker. Named after the county in Ireland's west and brewed in tribute to the export stouts of yore, it serves up heaps of dark chocolate and roast / coffee characters, plus a punchy, earthy hop bitterness, with a depth and balance that's utterly rewarding and has seen the beer become a multiple trophy-winner too.

During the second half of 2019, it was among the first four FogHorn beers to be giving the tinnie treatment, with Shawn saying at the time that canning that particular beer was a particularly special moment for him. The beer that gathers fans wherever it's found still means the most to the person behind it.