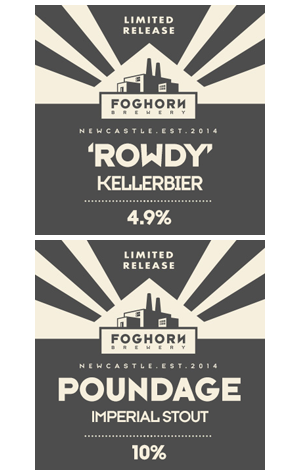 You kind of understand how FogHorn founder and head brewer Shawn Sherlock’s brain works when he explains that his Kellerbier was named Rowdy as it is his "quiet" beer. After slowing up brewing lagers as there wasn't much demand, Shawn and his team took a punt last summer and brewed this little beauty. It became one of the brewhouse’s biggest sellers and has continued to do so into 2020. All German malts and Kiwi hops and a Czech lager yeast come together in a brewing process that takes around six to eight weeks from mash in to glass. Shawn says he “gives it the time it needs” and refuses to push a faster version through. If it continues to be the quiet, unassuming, smash hit of the summer then this rowdy beer will likely command its own tap at the brewpub 52 weeks of the year.

He’s the brewer’s best friend, old Obadiah Poundage; it's the pen name of an 18th century London brewer who wrote a letter to the London Chronicle in 1760 arguing for a rise in the price of beer. Clever bloke that. FogHorn’s Poundage is a mix of Australian, NZ and German malts, with a high percentage of roasted barley (more than 20 percent). There's plenty of hops in there too, albeit not as much as FogHorn’s other dark favourite – Sligo Stout. Sitting comfortably on 10 percent ABV, Shawn says it's dangerously easy to drink, hence only being served in tulip glasses. It’s all velvety dark chocolate, hints of roasted coffee and that well-hidden booze.