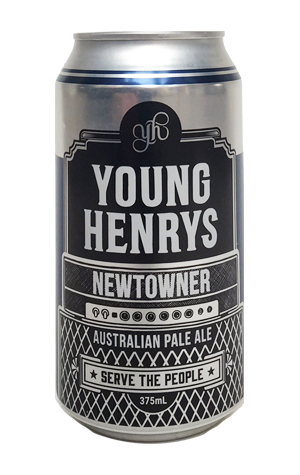 In December 2012, the Sydney suburb of Newtown celebrated its sesquicentenary and, to celebrate the 150 years since becoming a municipality, the crew at Young Henrys was invited to brew a beer in honour of the suburb they call home.

Named Newtowner, it was something of a nod towards Sydney's colonial past and modern inventiveness – an English style Summer Ale made with a trio of Australian hops that combined in a golden beer that’s simple and refreshing with a slightly dry finish. Originally planned as a one-off brew only available in the 2042 postcode, the beer hit such a sweet spot with locals that it soon became permanent member of the Young Henrys range and has gone on to become the brewery’s biggest seller.

It's also evolved over time, first released in bottles, then cans, then relaunched as the first of the brewery's new look cans to hit the market in 2017. On the outside, the revamp wasn't too drastic: the tinnies are still designed to look like a full Stack amp – even more so, in fact – but with the brewery and beer name easier to discern. Look underneath and you'll see it's tagged an Australian Pale now; that's because there's been a little fiddling with the wiring underneath. They've tweaked the malt backbone with the introduction of some of Kiwi malster Gladfield's light crystal variety, resulting in a copper colour and fuller body. The hops are peachy up front with some tropical/passionfruit flavours coming through later in, making for a beer we imagine will keep a fair few parties and BBQs rocking as the mercury rises.