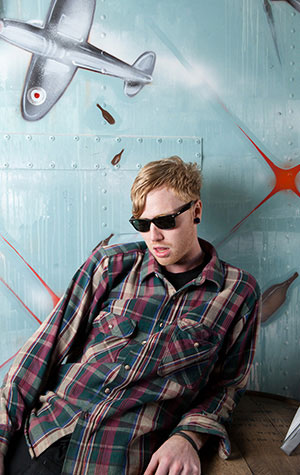 Young Henrys’ Newtown brewery has changed a lot over the past couple of years, going from a couple of small fermenters in a big warehouse to a brewery big enough to make that same warehouse look small. And, as the brewery has expanded, so has the brewing team; nowadays there’s a whole swathe of young ‘uns scrambling around between the tanks and learning the ropes. And as these young brewers learn their trade, they’re all getting the chance to come up with their own recipes and put them out as Young Henrys limited releases.

The first of these is the Komodo Swaggin’ from Hamish, the lizard-channelling, hip-hop beat-making brewer. His aim wasn’t to brew something dark in the ‘this’ll go well in winter’ sense, but rather a dark beer better suited to drinking in the current warmer weather. To do this he set his sights on the American brown ale style and delivered a beer big on four varieties of hops; Cascade and Citra from the USA, Kohatu from New Zealand and Topaz from Australia. These provide plenty of fruitiness, not to mention a healthy bitterness. It’s also got some classic dark and roasty characters, with chocolate being particularly prevalent, and the addition of oats to the brew helps to fatten out the mouthfeel. All told, it’s a beer the brewer can be proud of as it provides plenty of flavour in a tight package and demands repeated drinking. Nick O