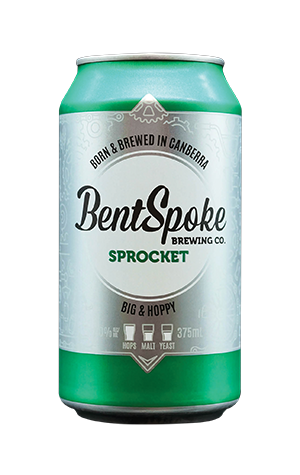 The Sprocket is described by the brewery as the Crankshaft Orange IPA's younger sister. In typically bent fashion, while there is an argument that it is younger given it was first brewed later, in pretty much every other way it presents as the bigger sibling. It's higher in alcohol for one and explodes out of the glass like few other IPAs you'll come across in Australia – or anywhere else for that matter.

Our first experience of the beer came when we were catching up with a mate who's involved with BentSpoke and had snaffled a small keg for his backyard deck. He wasn't in when we got there so sent a message telling us to head around the back and pour a beer. By the time he arrived back, a mini-epiphany was going on.

Safe to say, we're fans of the Sprocket here at Crafty Towers. It pours at the paler end of the IPA scale, sends explosions of tropical and citrus aromas in every direction then follows them up with more of those delicious tropical and grapefruit flavours, all the while balancing them with malt that does little more than allow the hops to take centre stage before finishing up beautifully dry. If you've had Thornbridge Jaipur fresh, it's in that territory. Comfortably one of Australia's best IPAs.