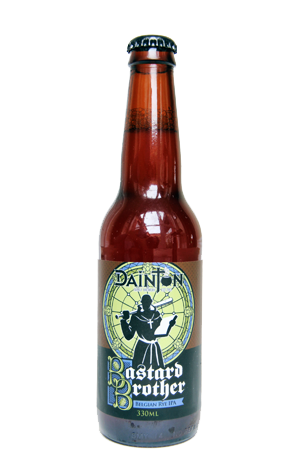 There seems to be something of a fondness for pillorying the world of Christianity within elements of the craft beer world. The religion's brushes with children have been sent up by Beer Here on the label for its awesome Malus Pater, while here Dainton Family Brewery and designer God Awful adorn a Belgian Rye IPA with a skinhead monk armed with baseball bat.

It makes sense insofar as this is a beer with a personality as complex as one would expect from a baseball bat-wielding monk. Indeed, there's so much going on, what with the liberal use of Dan's beloved rye malt, a Belgian yeast, bitter orange peel and a ridiculous amount of hops, that it's hard to pinpoint the constituent parts. For what it's worth, we tried and ended with aromas that included candied orange, fortified, creamy sweet malts, piney, forest floor hops and possibly even peaches. There's a serious spiciness to the flavour as well as a lingering resinous bitter finish that we felt compelled to append with "pretty damn bitter" when sampling.