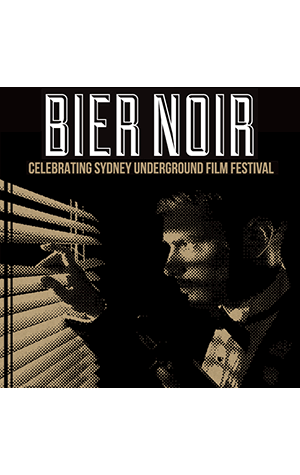 Many of the things people love about craft beer – think independence, challenging the norms and encouraging interest in local production – are the very same things you could attribute to local filmmaking. It’s therefore not difficult to imagine that synergy played a part in Young Henrys being invited to brew a beer for the 2015 SUFF (Sydney Underground Film Festival) which took place towards the end of September. Now, following the festival, the beer – and no doubt some of the films – will be available a little more widely.

Young Henrys Bier Noir is a German-style dunkel or dark lager: clean – both crisp and quenching – with a mild, malty character. The colour, or lack thereof, in the beer seems appropriate given that underground indie flicks generally tackle dark subjects in a manner that Hollywood blockbusters wouldn’t point a camera at. Without such broadmindedness we mightn’t have films like Bad Boy Bubby and, drawing that line out more than twenty years, a beer like MoonDog’s Bad Boy Bubbly. There’s certainly something to be said for a willingness to embrace the less wholesome side of life and it’s perhaps that attitude which led the brewers to refer to this beer as a “buzzing neon sign on a dark wet night”. Whether that leads you to a cosy bar or a dodgy porno theatre is probably by the by; it’s simply all part of the fun.