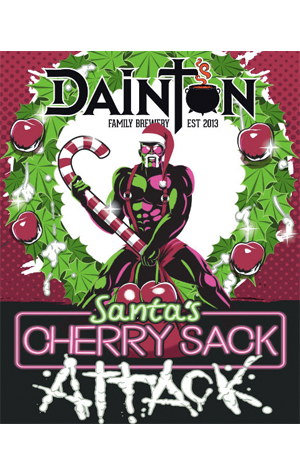 One thing that we can't deny here at Crafty Towers is that we like to write. Were we to calculate how many words were emitted into the public sphere via the site and its associated newsletters each year, it would probably represent some sort of crime against humanity. However, with the head Crafty Pinter technically on holiday on the other side of the planet (no such thing as holiday in Crafty Land, obviously), we've been leaning heavily on our band on contributors to keep the flag a-flying.

And now a brewer has offered to help out too. In the words of Dainton's General Dogsbody, Ev: "I know you're too busy to write up your classic soliloquies so Daniel has written one just to make your life easier." It's for their new festive beer, Santa's Cherry Sack Attack, and goes almost exactly like this...

Complex and sour like trying to dissect Blade Runner after too many psychedelics, yet as smooth and sophisticated as Don Draper is whilst smoking his favourite pack of tobacco darts… The Cherry Sack Attack will come at you from all angles and none. It will leave you longing for the lingering love of your first obsession and abandon you on the cold highway of reality when gone. Alas for you, there is a small chance that you may get a second glance… A small chance for more love and romance… Yet the chance is small and so will be your fervour if the chance becomes nothing at all…

But in seriousness Santa's Cherry Sack Attack is our take on what a real Australian Christmas Day beer should be. Using fresh squeezed Yarra Valley cherries and adding them to a sour malt base we have created a sessionable summer sour. The perfect beer to get you through Christmas day with the family.