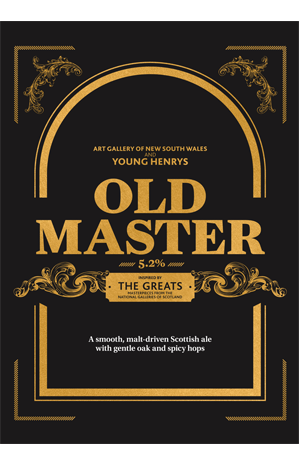 While the great number of new beers appearing these days means there are ample opportunities to get along to an interesting beer launch, it’s difficult to recall one at such a unique setting as that of the official release of Old Master: a private art tour containing works from some of history’s greatest artists.

The background to the beer, and the launch, is the touring exhibition The Greats: Masterpieces from the National Galleries of Scotland which is on show at the Art Gallery of New South Wales. It features pieces made in the last 400 years by a fairly handy list of painters: Leonardo, Raphael, Titian, Monet, Cézanne, Turner, et al. Get along to enough exhibition openings and you’ll know that beer is seldom the beverage of choice, so kudos to the team at AGNSW for reaching out to Young Henrys and inviting them to collaborate on a beer to launched in conjunction with the exhibition, and for heading down on brew day to get amongst the action.

As for the beer, how does one decide on a style or flavour when the brief is to pair it with works by some of the most talented humans to have graced the planet? After a private gallery tour in which the curators probed them for inspiration from things they were interested in, the YH crew found what they were after in two works from the 1600s; An Old Woman Frying Eggs by Diego Velázquez and An Interior With A Young Viola Player by Gerrit Dou. The brewers may say they were drawn to these pieces because of their colour, chiaroscuro and mood, but for a team of food-lovers and musos as much as brewers it’s surely no coincidence that they picked pieces whose subjects included food and music. Art does tend to imitate life, after all.

The resulting beer is a red and slightly sweet Scottish ale (as opposed to a Scotch ale). With toffee malt, a touch of Manuka smoke and spicy hops to match the addition of rye, Old Master is a rich and warming beer. Considering the inspiration, you could even call it old-fashioned in that its earthy character would be well at home in the bowels of some dimly lit post-Middle Age tavern frequented by either artist.

Head brewer Sam Fuss reckons Old Master was one of the most challenging and exciting collaborations she’s ever done, while on the gallery side the curators admitted the creation of the beer was an improbable meeting. Let’s just hope it’s not the last.