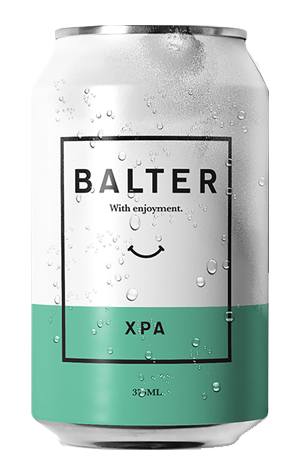 When Balter’s Gold Coast brewery opened in 2016, the founders claimed their plan was to grow slow and steady. Then they released their first beer, the XPA, and the general response was: “Good luck with that!”

With a pedigree including time spent at Stone & Wood in its early days and two trophies for crowd-pleasing beers when at Byron Bay Brewery, head brewer Scotty Hargrave was always going to be the sort who would know how to craft a beer suited to the Gold Coast climate – and to quench one's thirst at the end of a day catching waves. And so it proved.

The XPA – a contemporary tag meaning extra pale ale that has been interpreted in different ways by different brewers and which this beer has placed at the heart of Aussie beer lexicon more than any other – layers on the tropical, floral hops (US varieties Citra, Centennial and Amarillo) to deliver heaps of enticing fruity aromas. There's plenty of those flavours in there too yet they're delivered with such balance that the bitterness is barely perceptible, resulting in a smooth, refreshing drop that barely touches the sides.

From the time it first hit venues outside Queensland – where it disappeared faster than a shark faced with Mick Fanning on a surfboard – through to Scotty’s now regular trips to the awards podium to collect trophies and gold medals for this beer and the brewery itself, the XPA has proven a hit with every mouth it meets.

As we said at the top, good luck growing slowly.

Available on tap and in cans