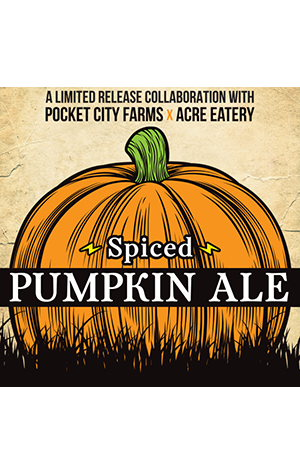 For their latest locally focused release, the folks from Young Henrys have been a bunch of busy bunnies, teaming up with Pocket City Farms and digging in their pumpkin patch.

Pocket City is a not-for-profit initiative that turns unused inner city spaces into urban gardens. One of these such spaces is the former site of the Camperdown Bowling Club whose flat greens have turned over a new leaf to produce, well, leafy greens. Or rather, in this case, bulbous orange pumpkins of the Queensland Blue variety (itâ€™s a colourful story, if nothing else). The pumpkins were the very first crop to be pulled from the ground at the old bowlo and, once harvested, they were roasted at the on-site restaurant, Acre Eatery, then sent up the road to the Young Henrys brewery where all 180 kilograms (representing a decent return for the first crop) was turned into a spiced pumpkin ale.

The purpose of the beer is to highlight the work Pocket City is doing to teach city dwellers about how things are grown, as well as being a demonstration of low impact brewing and keeping things in the community. Itâ€™s only fitting, then, that some proceeds from the sale of the beer will be going back to the farm to be put in the ground (metaphorically) to ensure the gardens continue to grow.