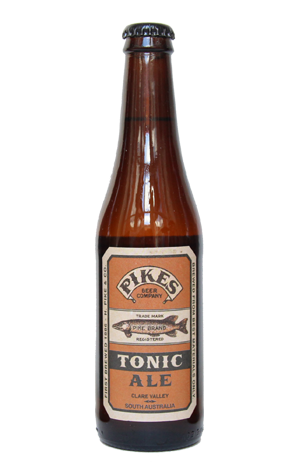 Now here's something rather different. Back during Pikes' original lifespan, the business not only produced more traditional ales and stouts but also had a Tonic Ale doing the rounds in the early 1900s. Apparently, it was sold around SA as a "Non-intoxicating Healthy Drink". And now the new generation has brought the drink back using the original recipe.

It's a recipe that features all Aussie malt and hops and much else besides: fresh orange and lemon peel, ginger, coriander and cinchona bark. It weighs in at a mere 2.3 percent ABV, pours a brilliantly clear pale gold colour, and offers up a herbaceous, spicy nose and floral and citrus like aromatics on the palate. It's light and spritzy with a surprisingly drying finish – not unlike a splash of tonic, in fact – which is perhaps why the brewers suggest using it as a mixer for your favourite gin.