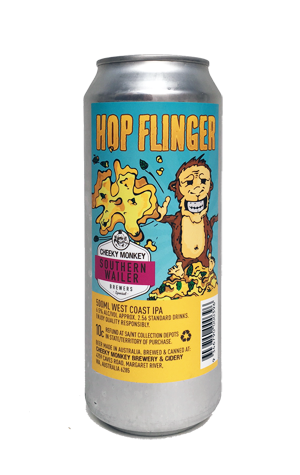 As far as images you might want to associate with things you're planning to put in your mouth, a monkey flinging poo probably isn't that high on your list (unless you're a subscriber to niche websites). But, for their latest limited release in cans, Margaret River's Cheeky Monkey has decided to go there, not just calling their IPA Hop Flinger but putting a monkey sat atop a pile of, um, something with hops in it, pulling lumps from said something and hurling them in your general direction.

Thankfully, this is a monkey that had the decency to clean up after itself, as the beer bearing its name is an enjoyable – and clean – take on the West Coast IPA style. It started out as a trial brew at the brewery itself, proved popular with visitors and so got the promotion to a bigger, wider and more aluminium-based release.

The beer features all American hops – a trio of Mosaic, Amarillo and Cascade – that will have lovers of all things passionfruity, citrusy and piney in their beers licking their lips. They've not held back on the malt front either, with some creamy toffee characters joining in as the beer warms and contributing a deep copper hue. They help keep a lid on the bitterness too and, as far as we can tell, each can is a poo free zone.