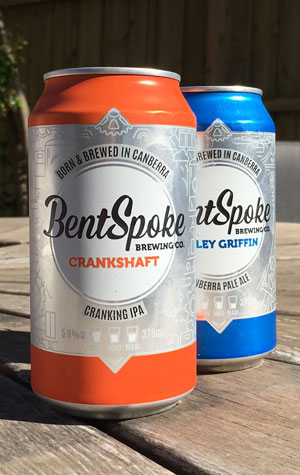 A year ago, BentSpoke announced plans to open a second, larger brewery it its hometown of Canberra. Part of the plan for the second site was to start packaging their beers. And now they are, with Barley Griffin and Crankshaft IPA the first two beers to receive tinnie treatment. For those who've come across beers such as Colonial's Small Ale in cans and enjoyed the "flip top" lids that turn the can into a wide mouthed drinking vessel, you'll be pleased to know BentSpoke have gone down that route too.

As for the beers inside, Barley Griffin is the brewery's gold medal-winning, light and fruity session pale ale named after Canberra's Lake Burley Griffin. Crankshaft is BentSpoke's flagship IPA, delivering far more character and punch than 5.8 percent ABV and 35 IBU might lead you to expect in a beautifully balanced package. We've always leant towards Crankshaft's bigger little sister IPA Sprocket but, revisiting the former for its can release, it's like picking between a free holiday in the snow or one spent touring the beaches of WA: you'd snap someone's arm off for a glass of either.