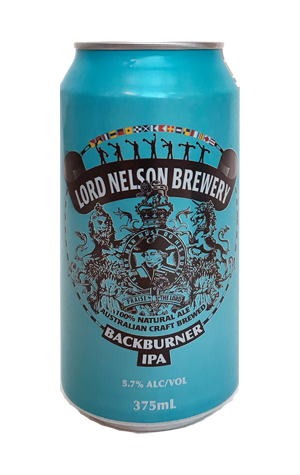 The Lord turned 30 in 2016 and is showing no signs of resting on it laurels. Having embarked on a series of occasional limited releases in 500ml bottles in the previous couple of years, it's entered the world of cans with a couple of beers brewed off site to be sent far and wide for fans of the brewery that can't make it to the spiritual home in The Rocks. One is an old favourite, the Quayle Ale, while the other is a brand new beer.

Backburner is an IPA, following in the footsteps of the popular Double Nelson but coming with a twist. The beer is darker and maltier than most IPAs doing the rounds these days and also features a Belgian witbier yeast and the curacao orange peel and coriander often found in such beers. The intention is to give the beer the spicy characters found in witbiers, albeit in tandem with richer dark malt characters and more fruity hop characters.

There's some disagreement at Crafty Towers as to where this combo has ended; on one side, there's a feeling that the beer is all about sweet, toffee like malts and a date like dark fruitiness, on the other, confidence that the grapefruit, orange and spiciness are there too. We all have different palates, which is part of the reason why we don't rate beers, so if any of the above flavours and aromas sound like your thing, grab a tinnie and judge for yourself.