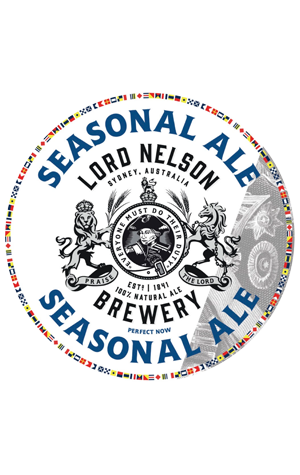 The Lord Nelson Hotel is the kind of place your grandad used to go get a pint and a pie with his buddies in the 30s… and where you can still go for a pint and a pie with your buddies today. It captures the quaint feel of a pub in the UK, and yet somehow that’s not a problem even on a sunny Sydney day. And when you step inside and take in the stone walls, the dark timber, the crackling fireplace… you already get an idea what the Mac Nelson tastes like.

Mac Nelson isn’t the first beer at the Lord Nelson to harness the spirit of the UK and put it in a pint glass, but it’s part of that proud tradition. It pours a beautiful coppery red, and is all about the slightly sticky malt flavours. The hops and the yeast - which was shipped in from drizzly Edinburgh itself - both play their part, but mostly as the glue that seamlessly brings the malt characters together. It tastes like toffee, caramel and chocolate. It tastes like mahogany writing desks and sepia-toned globes. It tastes like the slightly overcooked crunchy part on the edge of a sponge cake that turns out to be the best bit.

And, at 5.3 percent ABV, it’s milder than many local interpretations of Scotch ales and Wee Heavies, meaning you can drink a pint without falling off your stool and having your kilt flying up.