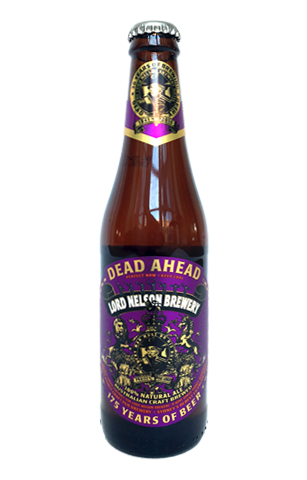 In something of a quinella, the 175th anniversary of The Lord Nelson hotel – Sydney's oldest continuously operated pub – and the 30th anniversary of The Lord Nelson brewery – Australia’s oldest continuously operated independent brewery – both occur in 2016. And, as a celebration of both, a new beer has been brewed. As is customary with The Lord’s beers, it is neither barrel aged nor blended. It is not infused with spices or sweetened with syrup. It has not been distilled or dry hopped to within an inch of its life. It is not a collaboration nor even cask conditioned. It is simply their take on the sort of British ales that inspired founder Blair Hayden to commence brewing at the pub back in the mid-1980s.

It glows in resplendent gold while the aroma is subtle with soft malts and the taste is rounded with a sweet and mellifluous character: butter biscuit malts and the sort of earthy hop character and broad but gentle bitterness that will be familiar to those who've supped traditional English ales in the mother country. Indeed, like those that inspired it, Dead Ahead is a classic Lord Nelson beer, one which you could sink pints and pints of until you walk out the door wondering where to find the nearest tube station. Befitting the occasion for which it has been brewed, the beer has been named with an eye fixed on the direction the brewery will follow over the next 30 years: Dead Ahead. You wouldn’t expect anything less.

Read our feature on the hotel brewery's first 30 years.

On tap at the Lord Nelson

In bottles across Australia.